Ixion
Vanguard of the Damned 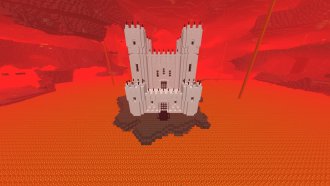 Lore
The Legend of Ixion

In the beginning, in a past life, they were criminals… murderers, bandits, arsonists… the worst scum of the overworld... but that life is gone. Banished to the deepest parts of hell, in a prison surrounded by lava and guarded by a massive beast, the prisoners that became Ixion endured decades of torture and suffering… In that cavernous expanse, the very air felt as though it would flay the flesh from their bones, the stench of death and decay and sulfur a constant reminder of their punishment.

It is said that where there is water, there is life, but they had no such luxuries there. Many would succumb to that place, their souls withering to dust and forming a dense layer of sand around the blackened prison. But some would not be broken.

They scratched through the backs of their cells, over hundreds of years, sitting with their backs covering the hole, biding their time. Some attempted to flee the dreaded island. Alone, they stood no chance of surviving, whether it be at the hand of the great beast, or were simply, and unceremoniously, burned alive. A day came when the prisoners rose up, murdering the demons that imprisoned them. Many perished in the desperate fight that ensued, and those that remained built weapons and slew that great beast which rested in the broiling lake.

From the bones of the beast, the framework of a keep was built. But even then, the seed of dissent had been sown among the prisoners. Strength they valued, but above all cleverness and treachery. The leadership of the band was volatile, and a great battle ensued among the prisoners that remained. Eventually, when the bloodshed was over, the survivors finished the keep with the skeletons of the fallen - their allies would guard them in death as they had in life, while the bones of their foes would serve as a warning to any further would-be assaulter. To this day, the remains of the mighty beast still lie in the lake, lava flowing through its cracked skull.

Those few left were extremely loyal, but only to themselves. They dedicated the finished castle to the infamous arsonist of legend, Ixion. They were few, but what they lacked in numbers was made up for by their incredible tenacity and guile.​

Our members have a lot of freedom to do as they please. That being said, there is still some baseline which must be maintained.
​
There is no rule against attacking fellow townies, however predatory or malicious actions against town members is forbidden. Contests of strength between consenting parties is always welcome. PVP is something our town values. Toxicity is not.

Joining Ixion​
Although Ixion has opened to new recruits, it is not for everyone.
We are looking for players who aren't scared of a fight, who enjoy a bit of the RPG element of herocraft, and who are in keeping with the old traditions of the server. Veteran herocraft players and newcomers who posses sufficient skill are welcome to apply. If this sounds like you, Ixion might be the place for you.

We are looking to build a close community, not a huge town. Each new member will be vetted by the Ixion council. Wether you apply on the forums or get in touch with us in game, we want to make sure we get along before inviting you into the town. We also want to make sure you are up to par with the other town members.

We can offer you PvP, capture point control, and well organized PvE groups. Ixion was built in the nether where PvP is always on, and keep inventory is off, just like herocraft of old.

Until further notice, the application format will be informal. Comment below, or get in touch with me in game.

Great Town Post Minor Suggestion fix the text because its hard to read without highlighting it. Good luck Futt.