IGN: GUCCISAUCEDADDY (use to be ilovepigsman at the time of ban)
Banned by: @Kenneth_Chow
Time of ban: 8/9/2016
Reason for ban: alt account
Your story: I was accused of having another account named riche7846 (my cousin). we have been in game together and played with each other... On the day of the ban I was at riche7846's house but didn't bring my laptop with me, so he let me use his laptop and so I switched accounts and told everyone of proof we are cousins. This resulted in a perm banned for alt account for both accounts.
Last edited: Jul 18, 2018 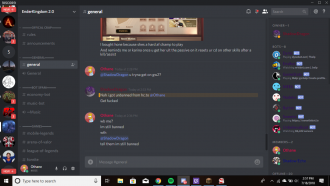 I was informed by Riche7846 (Shadowdragon) that he was unbanned but when I tried logging on I was still banned.

Surprised another Admin didn't pick this up. I've been inactive and haven't checked the forums. I'll give you a chance and unban you.